Well, 2hrs of sleep and 6 hrs of work later I'm on the plane. Everything was a bit hectic. I was able to to pack much less than I expected. I only brought 1 pair of pants. (the one I'm wearing...)
But I really like the backpack that I got. I wasted a lot of time playing with it instead of packing though. But I did manage to book a hostel for the first night of where I'll stay.

I get through the work day (somewhat), and proceed to the airport, everything goes smoothly (i.e., I don't miss my flight). When i get to the gates, I'm always gravitated towards the planes: gracefully, majestically sitting there. 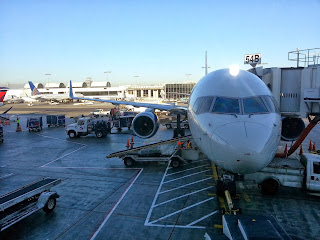 For some weird reason, the flight is filled with Japanese school girls. (Like literally, and just girls, very few Japanese school guys.) But I'm seated next to an oldish looking man who is apparently a professor; we both mutually agree to wake the other up if food service came and we were knocked out.

I unfortunately couldn’t fall aslseep while on the flight though. I kept watching movies or just didn’t feel sleepy. This stressed me out during the flight because my plan needed me to get enough sleep so that when I land in Tokyo at 1030pm local time I will be able to party until 730am, then catch the connecting flight to Osaka, then go for a bicycle tour of Osaka. Not being able to sleep was stressing me out and making it even harder to fall asleep. I ended up watching a few movies I've been meaning to see but never had a chance to: Pacific Rim (it was so cheesy, I didn't even finish it), the Wolverine (it was a freaky sort of movie, actually my least favorite of the x-men or wolverine movies. It had a lot of japanese stuff woven into it. I didn't like this move). In any case, I landed, and proceed with the plan of partying till sunrise.

I meet another backpacker who was in a similar boat (no hotel booked for the night) and we talk about our plans a bit; this somehow caused indecisiveness (probably my fault, but eventually, at about 1am, we end up deciding to go to the Shibuya neighborhood). I specifically wanted to go to a club I read about called Womb. It took us forever to find it because it's really really well hidden. 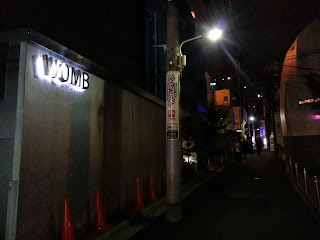 But inside, it was pretty huge. It had 4 levels (a bar level at the bottom, 1 main dance floor level, 2 smaller bar/dancefloor area levels, so a total of 4 DJs). Unfortunately, they were ALL spinning the same music that I didn't really like. (Lyricless, repetiviely electronic music). But the production and lights were good, especially on the main dance floor: 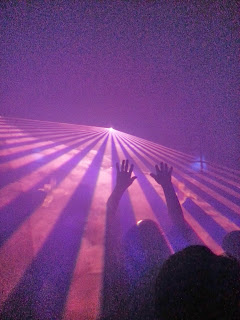 We leave the womb and we walk into the Shibuya intersection. This is allegedly the busiest intersection in the world. (Not so busy now at 4am are we?) we take the opportunity to pose in the middle. 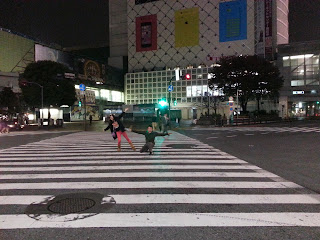 It was about 4am and I then go by myself to the Tsukigi fish market. There was no one at the gate when I got there so I just walked in. The whole place was empty because I was early. 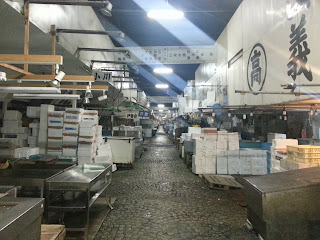 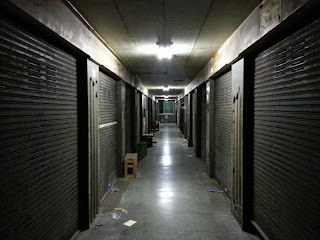 I walk around about an hour, and the place should have opened by now. I'm a bit confused. But I gotta get back to the airport to catch my connecting flight. So I exit the market. I leave through a different entrance that I came in at, and I discovered this sign 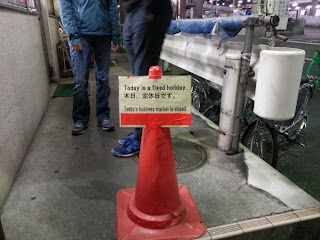 DAMNIT! No wonder the place is empty. it's closed! it was sunday morning at 5am, and the place is ALWAYS closed on Sundays. SO DON'T GO ON SUNDAY. Now I'll have to do another all-night clubbing thing and come back again on a weeknight, ugh!! 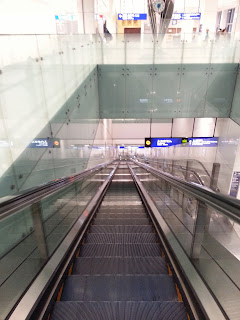 And when I got to the top, I saw a guy knocked out on the chair. hehe... that could've been me throughout the night, but instead I was doing the above. 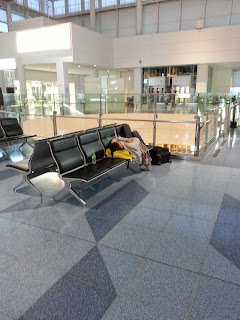 Well, that was an fun first 8 hours. Onward to Osaka!!

Day 1:
http://dfenestr8.blogspot.com/2013/11/vabcation-blog-what-actually-went-down.html
Posted by Kintsukuroi at 2:02 AM