I get to osaka and it's raining. This kind of threw a wrench in my plans 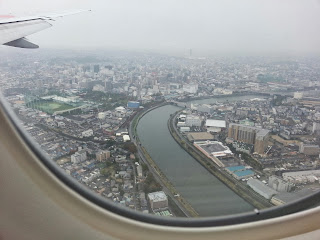 I had originally booked a bicycle tour for the day through http://cycleosaka.com/routes.html, and I now wanted to cancel it because of the rain. I emailed the company and the guy said it's up to me if want to try. I was mainly worried about getting sick due to exercising in rainy weather added onto the lack off sleep. Well, do i pussy out, call it a day and twiddle my thumb at the airport? Heeellll nah. I decide to go through with it because this was something I was looking forward to and I didn't want to see Osaka by having to go from site to site through the subway or bus system. Future me would have to take care of future-sick-me.

And guess what? The rain died down :)
The bike tour turned out really well. We basically biked through every touristy spot in Osaka (albeit we didn't really get off and enjoy each spot). Ben, the tour guide was really cool too. He was from the UK, was fluent in Japanese and knew more Chinese than I did, so he was able to explain a lot of Japanese terms to me in Chinese, and it made a lot more sense.

We started on some river front 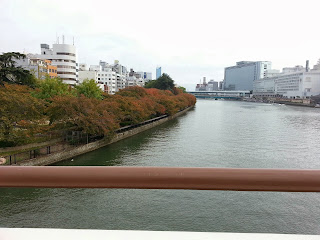 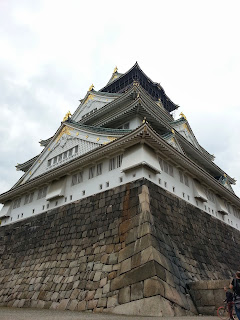 Here's me and the castle and the bike I used (it was a really decent bike). 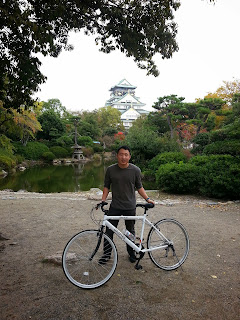 Then we had lunch near this retro, sci fi tower in a district call Shin-sekai. (The tower was built in the 1930s as a part of a theme park to represent "tomorrowland", melted down for steel in ww2, then rebuilt. It reminds of one of those different universe movies, where its like the 1930s and 1940s, but there are hovering cars. Btw, shin-sekai is 新世界 - xin shi jie in Chinese, which is literally, "new world") 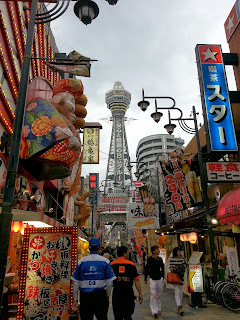 We then proceed to other neighborhoods in Osaka. Such as this one in Namba with Glico running man: 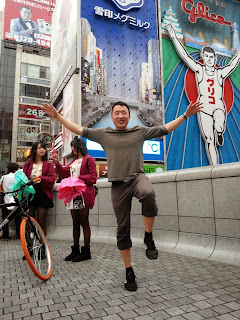 This ad is super old and basically famous for being famous. Apparently, all the ads around this glico man ad changes, but not this guy. Sometimes other companies would rent out the words in the middle (like adidas, for example).

By the time we're done with the tour, I'm exhausted, it is pouring (it started raining hard the last 30 minutes of the tour). I find my way to the hostel by 6pm, get to my bed, set my alarm to nap for 2 hours so that I can wake up to check out Namba's nightlife and food. I knock out. (the hostel was Hana Hostel in Osaka, and it was great.)

I wake up feeling really refreshed. Really really really refreshed. It was 2am. Fuuuuudge. I missed out on checking out Namba's food and neon lights. By this time, there's nothing open except clubs. I go out to eat at some 24h restaurtant. It was aite. I consider going to a club nearby but decide against it. I get back and try to sleep.

I can't fall asleep and it's about 530am. (damnit, i should've just gone clubbing).
At that point I get up and look for hostels in Kyoto (cuz I still hadn't planned it yet). I found JAM hostel, and booked them. I get up and ask the current hostel's front desk about what I can do now to sample Osaka's food (Osaka is known to be a foodie place), and I'm told to check out Kuromon market.

I head towards that area, passing through Shinsaibaishi and Dotonbuir (the 2 areas of Namba that I meant to check out last night that are bustling at night, but now closed in the morning - damnit, what's with me and getting to places when they are closed due to poor planning and bad sleep habits?) 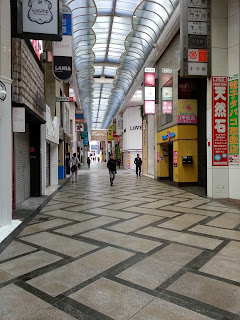 But i get to Kuromon market and it turned out to be a wonderful local market with lots of good streetfood. (And unlike how Shinsaibahi was dead during the morning time, Kuromon was bustling because locals come here to do their morning shopping).

I notice a shop that was slicing a fish and packaging the slices for sale immediately. I never really ate a chuck of sashimi before as if it was steak (like getting a real mouth full), and i figured this was the time to try.

I bought this and ate it like a candy bar. It was good but I'm not sure if it was amazing (but that's because my taste buds aren't that refined, and i think everything is good) 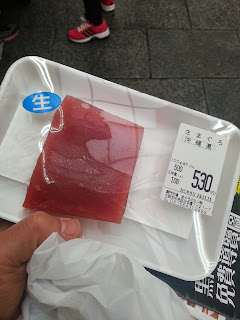 So technically it's now day 2, and I had planned to be in Kyoto by now. So I get back to the Hostel, grab my stuff, and go to Kyoto.

Posted by Kintsukuroi at 2:30 PM