I'm in XiNing, which is almost smack dab in the middle of China. There are bullet trains that can get to Shanghai in 10 hours, or Urumqi in 10 hours. Urumqi is supposedly the farthest major city from any ocean in the world. 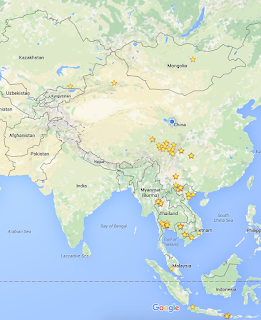 I'm debating whether to go northwest to Urumqi, and then ultimately Almaty, Kazakhstan, or go north east, towards inner Mongolia (within China), and eventually cross the border into Mongolia, then Ulaan Bataar.

Well, I googled Almaty vs Ulaan Bataar, and it turns out that Almaty has a much less expensive cost of living, has much cheaper flights back to Shanghai (where I already have a return flight back to the US), and Kazakhstan overall is a much more populous country with a higher GDP per capita (approximately $12,000 vs $4,000 USD).