Bali on a Dirt Bike

Out of my 12 days in Bali, 9 days were spent surfing, 1 spent visiting a cool startup incubator space called Livit (I emailed them asking for a tour and they agreed!), and 2 days were spent on a dirt bike. This post is about the dirt bike days.

Day 1 on dirt bike:
Renting and riding scooters on previous days led to googling for motorcycle or dirt bike rentals, which then led to looking for guided dirt bike tours. There are several companies that do this, but the one I settled upon was Bali Dirt Bike Adventures, rated 5 stars on Trip Advisor.

I picked them because after browsing several companies, they offered the best price for the amount of hours of riding. They had several packages, and the one I picked was the rainforest one, which the owner said was easier than the volcano one, and also had more seat time on the bike.

I was picked up at 8:30am and we didn't arrive at the dirt bike area until about 10:30, and we're basically in the boonies by then (but then most of the island is boonies.)

The first thing I see is this: 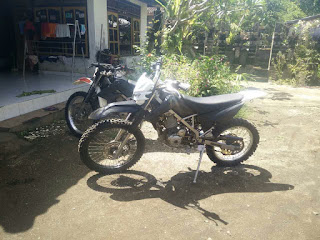 I thought, sweet... it looks like a really decent bike, I wonder if I'm gonna be riding that.
I was given all the gear to wear including socks, and I left all my belongings with the people there.
It turned out I was the only customer today. I had two guides, one was a funky man in his 30s or 40s maybe and another was a 11year old kid (but man, they both kicked ass on dirt bikes and picked my butt out of a ditch countless times.)

After I was suited up, I was told to get on my bike, and they pointed at the one I was originally eyeing (sweet!!!)

The guides get on their bikes and motion for me to get on mine. They start their engines and motion for me to follow.
"Wait wait wait", I yelled. "Ummm, give me a quick refresher, this right one's the brake right?" (I actually hadn't ridden a motorcycke since the motorcycle riding class I took 4 years ago. That class had about 8 hours total of riding time, and that was all the motorcycle riding experience I had in my life.)
The guides get off their bikes and walk over to my bike. "Front brake, back brake, clutch, shift, engine cut off", he points and says.
"Cool got it, what about that one."
"No touch. ok?" he smiles, pats my back. "Ok, let's go!" And off we went. We first went through some flat ground where the guide did some tight turns, just to make sure I was able to ride. Then we hit the trails.

After a while, we got to a ride terrace, and I was so happy to see it because it was something I had read about it. 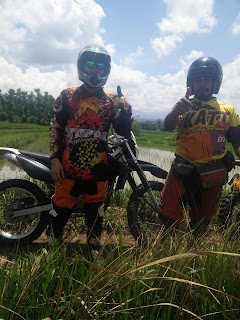 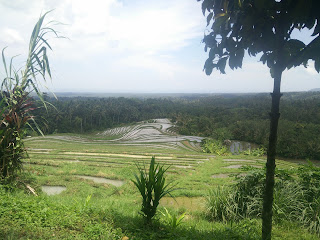 We then went up some seriously muddy hills, and that's where I had the most trouble and dropped the bike a lot. Two guides were indeed needed. One guide to ride in front, one in the back to look out after you. And both guides were needed to pick the bike up after I rode it into the ditch and dropped it.

After the rice paddies and going up the muddy hills, we hit up a waterfall to cool off.
We then grab lunch. Food was Nasi Goreng at a local warung (warung=small mom/pop shop) 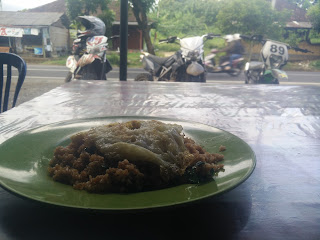 Next we hit easier trails (no mud) to get to the beach. And at this point, I'm smiling the whole time. It was so beautiful. Breaking waves and roaring ocean to my right, and a beast of a machine under my control, rumbling and pushing me forward. 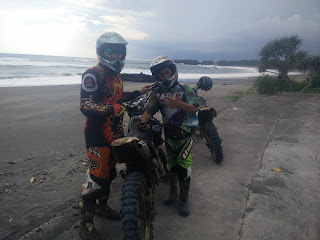 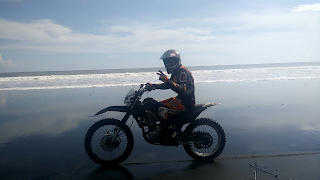 There were a few times when the terrain just became ridiculous. Like one section where we rode up some stairs (!) onto a beach boardwalk in order to avoid the tide and wait it out a bit. Once the tide went down, we rode back down the stairs and through the knee deep sea water. There's water all around me, the bike is making wakes, pushing through the water like a boat, and I thought the engine was going to drown, choke, and die, but I kept revving, and it kept pushing, and it stayed alive and carried me through. Mad respect for dirt bikes!

We left the beach and made it back to drop off the bikes at around 5:15pm after about 6 solid hours of riding. I was definitely satisfied. The total price came out to be about $135USD + tip (their website says $120 for single person, $100/each for two or more. I also had to pay $10 extra because my hotel was further away, and $5 guide fee, which wasn't mentioned)

After having so much fun on a dirt bike, I decide to rent one of my own from
http://balibikerental.com/. Again, there were several companies that offered this, but this company seemed the best all around, and crucially, their rentals came with a gps/phone holder (this was immensely valuable).

This was my last full day in Bali and there were many things I hadn't seen nor done yet. The two that topped the list was the volcano on the island and snorkeling. So I wanted to tackle both. The volcano required a 1 or 2hr hike that I wasn't going to do, but I at least wanted to get close to it while still on paved road. And then north of the volcano, on the north shore of the island, there was a diving spot called Tulamben with a ship wreck I wanted to check out.

I ride for about an hour, get distracted by some rice terraces 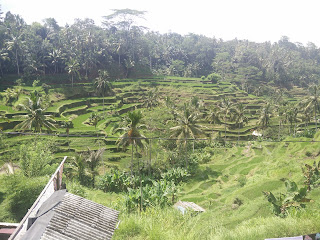 ride for another 30 minutes, and finally see the volcano in the distance. 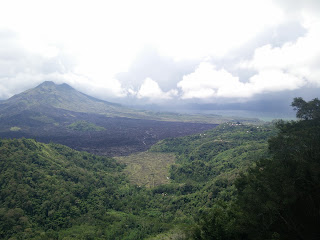 There's the volcano to the left, a lake to the right, and a road through the middle that reaches the ocean on the other side. I was gonna take that road. 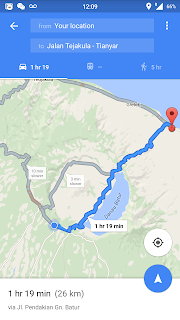 As soon as I start down towards the basin of the crater, inclement weather hits. I mean rain. Massive. Freaking. Rain. And I get completely soaked, as does the ground. 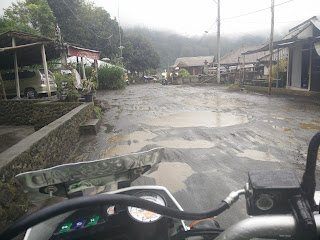 As the rain drops fell into the mud puddles though, they produced some very beautiful droplets (I failed to get a pic of those).

I get through the basin, and start going uphill again on the other side of the basin. It gets really hilly going back up and really wet, and I drop the bike once while going slow. I was unscathed and so was the bike. Along the way I also see all these locals carrying baskets on their heads, waking on this steep foggy terrain. It was really beautiful. 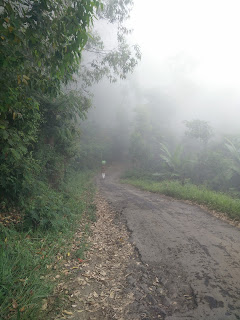 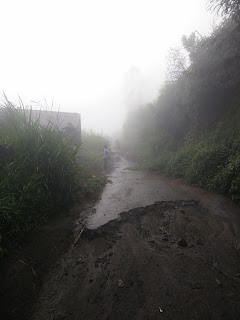 Anyway, about 1 hr later, I finally make it out of that crater lake area and get to the dive spot. People said there's a shipwreck about 30 meters out, but I couldn't see shit. 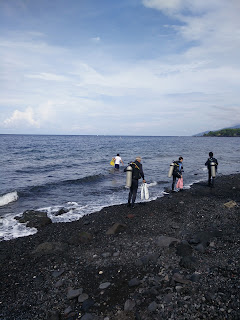 But I parked the bike, rented snorkels and proceeded to find the shipwreck. I swim aimlessly alone, don't see any shipwreck, nor any other swimmers, and am about to give up and go back to shore, when a guy on a freakin stand up paddle board paddles by (of all things, a SUP, in the middle of the ocean.) He points me in the direction to continue, and I do. And I'm still swimming along looking down, when suddenly, it comes into view. Below me, a huge bow structure. It was huge, amazing, and eerie. (Sorry, no pics).

After snorkeling, it was about dark, and I needed to get back to my hostel in Ubud, but I didn't want to ride through the volcano area again so I decided to go around. 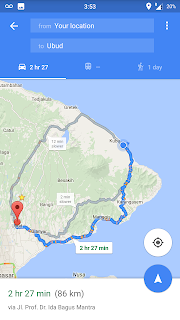 Long story short, my phone's GPS malfunctions (because I had tried to take it snorkeling in a plastic pouch and seawater got in), I get lost, I ask for directions in english and get responses in Indonesian, I have to refuel several times, I get dinner, I ride through twisty mountainous areas in the dark (something I didn't intend to do), I try to follow some scooters carrying passengers also riding through the mountain, but I can't keep up with them and they leave me in the dust (even though I'm on a faster bike), but eventually, I make it back alive and exhausted.

Alright, last day in Bali, I wake up at 7, my flight's at 10:30, and I need to return the bike. Fortunately, the bike rental company said they can meet me at the airport to pick up the bike. I pack up my stuff and am running a bit late, as usual. Today I need to ride with a 10kg pack: 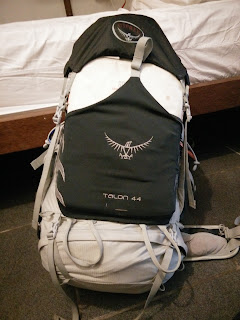 (Good thing I didn't listen to my mom who told me to get a roller luggage case with wheels. pffftttt. ALWAYS be able to have 2 free hands.)

I'm a little rushed because I was flying from Bali to Bangkok via Tiger Air (a Singaporean airline), and Singaporean airlines don't mess around. I know this first hand because the last time I flew on a Singaporean airline, it was midnight, there were no lines and no one else at the airport, and I arrived 50 minutes before my flight instead of 60 minutes that they demanded, and they wouldn't let me check in and I was forced to miss the flight.

But today, just as I make it to the airport, I see police checking for license and registration. I didn't have an international driver license, and I've heard many stories about how they fine people without an international license, but I super lucked out, because he looked at my California driver's license, we made small talk, I smiled, he smiled, and he let me go! I return the bike and make my flight. Woohoo!!!
Posted by Kintsukuroi at 10:09 PM